You can go anywhere in the world from the NYS Canal System. The waterway that opened America to the west is reopening little by little. McLaren is providing underwater inspections, mechanical and electrical inspections, load rating analysis and hydrographic surveying for the New York State Canal Corporation’s Eastern Division. The Canal system fully opened to Lake Champlain last week.

For the reinforced concrete tower, McLaren’s facade team worked closely with the Italian firm AZA INT Corporation to deliver a stunning custom tower curtain wall system. In order to create a flush design with superior energy efficiency, our engineers utilized a prefabricated WICONA glazing system, not typically seen in the US. All of the glass load is supported on the exterior of the thermal break zone webbing which is made from recycled polyamide. This offers the building envelope a high level of energy efficiency and low thermal bridging that meet NYC’s strict sustainable construction goals.

Student Housing on its way up at Stevens Stevens Institute of Technology is looking to the future with one of its most ambitious infrastructure projects. Construction of The Student Housing and University Center is set to redefine its campus community and culture. Two new residential towers, one 16 stories and the other 18 stories, that will provide much needed campus housing options for nearly 1,000 students once completed and safe.

McLaren’s Construction Engineering team is working with Orange County Ironworks, LLC Works on the steel connection design and erection means and methods for the two-truss pedestrian bridge that will connect the two student housing towers via the third floor.

A unique challenge our team had to overcome when erecting these trusses was the inability to use shoring towers to temporarily support the truss chords as it was being erected and installed. Instead, we installed the top chords first then the remaining members in a particular sequence.

Find out more about how we are helping construct this glass enclosed bridge that will one day provide the New Jersey university with stunning views of Hudson River and mid-town Manhattan, here.

What is a Bathymetric Survey? A bathymetric survey (sometimes referred to as a fathometric survey) is a type of hydrographic or water-based survey that maps the depths and shapes of underwater terrain to illustrate the land that lies below. Bathymetric surveyors work to obtain an exact representative image of the seabed and identify elevations, anomalies and the presence of scour around submerged structures. They also analyze and define the surrounding shorelines, tides, currents, and waves to create a better model of the area features overall. When performing bathymetric surveys in deeper waters for marine construction projects like dredging or offshore energy, McLaren typically utilizes multibeam survey technology aboard a custom vessel. Long ago, bathymetric survey techniques used pre-measured heavy ropes lowered over a ship’s side (lead lines), but today, technology like multibeam echosounders safely attach to a manned or unmanned vessel to conduct accurate and precise measurements. The multibeam system pings sound waves in a fan shape of narrow adjacent beams that bounce off the seabed and return to calculate the distance to the seafloor. For these shallow water surveys, our hydrographic crews have been using high-tech equipment including Teledyne Z-boats and HyDrone Unmanned Surface Vessels (USV) combined with either a multibeam or singlebeam echosounder, positioned with RTK-GNSS. For projects such as the survey of bridges and nearshore embankments, topographic mapping is often needed in addition to a bathymetric survey. For this, McLaren uses custom solutions tailored to each project, that may include the use of small Unmanned Aerial Systems (sUAS) / Drones, mobile lidar, or terrestrial 3D laser scanners.

McLaren’s bathymetric survey work has been an integral part of the development of many bridge and marine projects like Domino Park, Weehawken Pier, Westchester Bundled Bridges, NYC Ferry system and the development of Off-shore Wind facilities in the United States. “Hydrographic surveys are one of the first steps to determine if a project in or near water is conceptually and physically feasible,” says Steven MacDonald PLS, P.Eng., McLaren Albany Regional Director & Geomatics Principal. “In addition to large offshore or near-shore construction projects, these surveys can also be used as analysis for flood inundation, scour and stabilization, water-quality studies, waterfront facility inspections, habitat mapping, dam removals and environmental spills.”

Steven MacDonald can be reached for more information on Bathymetric Surveys and all our other Hydrographic, Geophysical, and 3D documentation, surveying capabilities. He is an industry leader who possesses a dynamic blend of renewables, geosciences and environmental expertise. Steven has over 15 years of experience delivering high resolution hydrographic, geophysical, geotechnical, cadastral, and environmental surveys with specialties in Offshore Energy, Nautical Charting, Emergency Response, and 4D full life span monitoring. 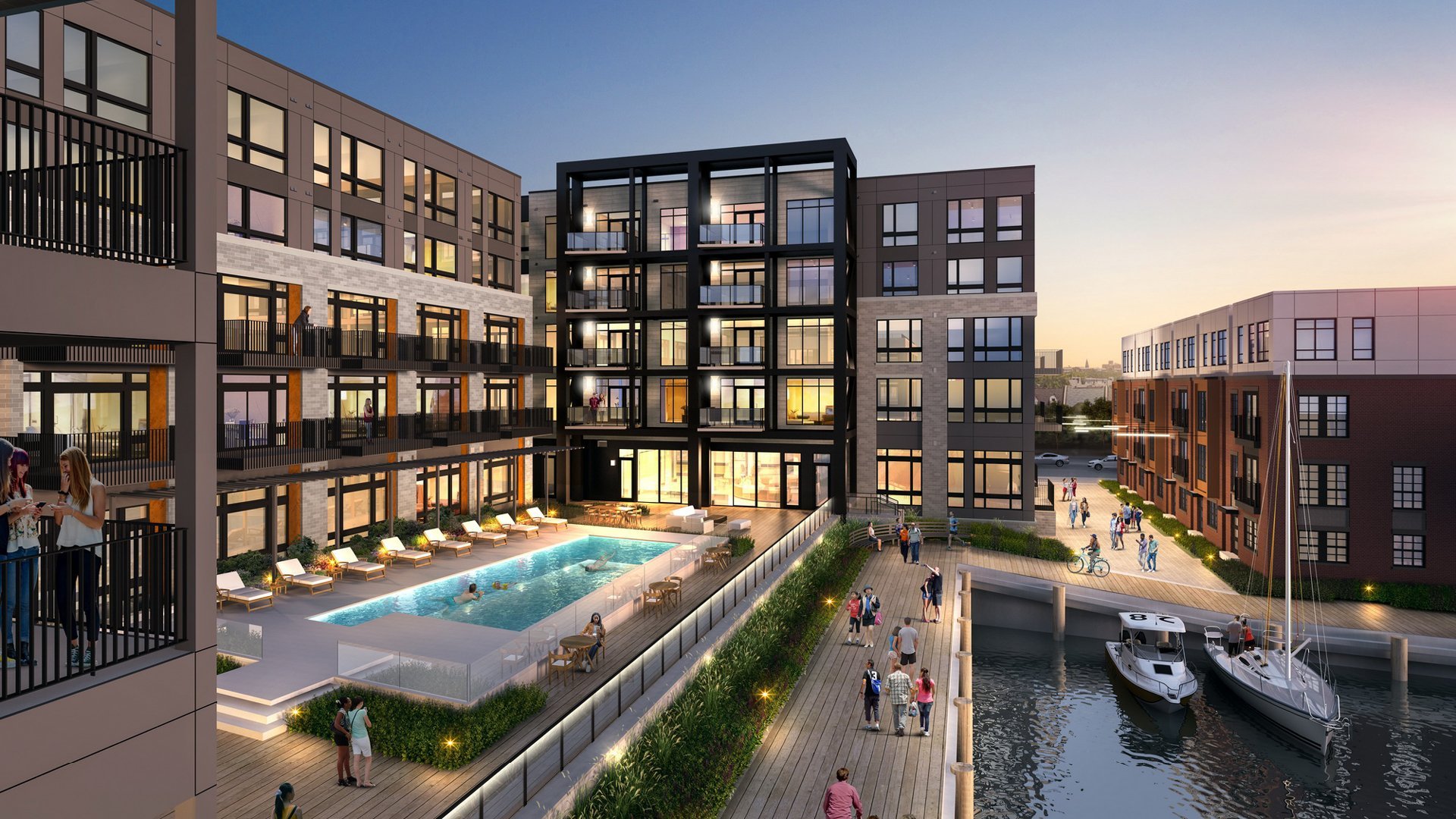 The planned 285-unit structure warehouse conversion project will repurpose a section of the site’s existing two-story Wolfe Street warehouse to a parking garage, fitness center, residential entry and storage space. A three-story addition will be constructed above the existing levels and be set back from warehouse parapet. Adjacent, a 5-story, 307,500 sf addition will be erected on existing foundations to house a leasing center, main amenity space, and residential units.

McLaren’s marine division’s in-house P.E. divers performed above and under-water inspections of the bulkhead system and concrete platform lining the warehouse conversion development. The team made recommendations to increase the longevity of the existing system and designed a new bulkhead system, reusing the existing tie-backs and piles.

Redefining the Rhythm of Business- Formation of the Supergroup Marketing Strategy
Whether it was the joining of solo artists Crosby, Stills & Nash (plus or minus Young) that revolutionized American pop/rock music or the uniting of the Avengers to save the world from destruction, Supergroups have always been successful when great individuals collaborate. The Supergroup concept, when merged correctly, can become one of the best marketing strategies to propel your business forward. Learn how to form your own Supergroup with out-of-the-box synergy and redefine the rhythm with creative, experimental ideas.

Denisa Moss-Heitlager, Director of Marketing, Matt Kawczenski, P.E., S.E., F.SEI, Pennsylvania Regional Director, and Ray Fusco, Director of Client Relations, will discuss marketing strategies aimed at developing stronger communities for a successful rebound. Join us as we share ideas for redefining the rhythm of New Jersey business through the formation of Supergroups and how you can adapt it to your industry, market and community.

Congratulations to Facade Engineer, Brenna Henry on her installation as Director of Community Outreach at the Lower Hudson Valley Branch of ASCE (American Society of Civil Engineers) Met Section!

Brenna started as an intern in our Building Envelope Group and was hired full-time facade engineer right after receiving her Bachelor of Engineering degree in Civil Engineering from Stevens Institute of Technology in 2018.

Specializing in consultation, design and inspection of facades, she has been a part of building up some of the most iconic projects in and around NYC, including the TWA Hotel Renovation, LaGuardia Airport’s Concourse B, the Virgin Hotel in NoMad, Design of the Highline’s West Stair, Columbia Business School and the Marriott International Headquarters in Maryland.  Check out some of the other stunning building envelope work she has been a part of on our Facade Engineering page.

Brenna has been giving back to her community in countless ways, making her a great asset to the ASCE Met Section as they continue to reach and bring a younger demographic into the engineering field. Her local involvement includes:

Join us in congratulating Brenna on LinkedIn!

Even prior to COVID-19, the lack of Affordable Housing was an entrenched problem that is now being exacerbated by the unprecedented levels of unemployment and loss of income being experienced.  Faced with this challenge, cities like NYC have been continuing affordable housing development as essential construction.

Gain insights into the difficulties and the current economy, hear how affordable housing development incentives work, understand coliving solutions, and learn what experts in the industry are saying.

This AIA-accredited course was made free by the partnership of Pratt Institute School of Architecture and AIA Brooklyn in an effort to service and benefit the AEC industry during COVID-19.

McLaren’s Bridge/Highway/Rail team has begun work on the $115 million Design-Build of the Lower Westchester bridges with Halmar International. During this initial phase, our surveyors and geotechnical engineers have been in the field completing pre-construction evaluations at three locations just north of NYC in preparation for the replacement of five full bridges and a culvert.

This NYSDOT infrastructure project (D900049) aims to mitigate frequent flooding concerns of the sites’ overpasses and adjacent highways and includes 1,700 feet of soil stabilization along the Saw Mill River Parkway and extensive highway, drainage, utility and Intelligent Transportation System (ITS) improvements along each high-volume corridor.

The projects are located at three specific sites in lower Westchester County: Hutchinson River Parkway at Lincoln Avenue in Pelham, NY; Saw Mill River Parkway in Thornwood, NY and Route 1 in Mamaroneck, NY. Further details on the five bridges include:

Take a sneak peek into a project that may soon serve as a unique model for urban ecological restoration. McLaren’s project partners recently presented South Wetlands Park: A 3D Walk Through of What Could Be! Delaware River Waterfront Corporation and Olin discussed the fascinating features and activities slated for Philadelphia’s nature-based public space and testbed for innovative waterfront adaptive reuse techniques and technologies.

McLaren is providing marine engineering services for the designs of piers 64, 67 and 70. By blending public access with the creation of terrestrial and aquatic habitats that will enhance and revive resiliency and ecological vitality in the area.

Learn about the concepts for the ecological restoration of this community-centered park and what McLaren is doing to employ natural processes in riverbank stabilization and innovation in wave energy dissipation, here.